Chris and Paul Dube have had a role in the community that no one else can claim: The pair have been lighting the United Way Torch, which has resided at the base of Woodward and Jefferson Avenues, for more than 20 years.

It as 28 years ago when I saw my first torch lighting ceremony. Fresh out of college and 22 years old, I was just starting my new job with the United Foundation,  the precursor to United Way for Southeastern Michigan

In a world where things move faster than the click of a mouse, we have a tendency to jump to the next new thing, and as a result, we sometimes miss the importance of tradition.

The tradition of lighting the Torch first began in 1949.  Originally, the Torch was a wooden structure that had to be erected each year.

It was replaced with the current Torch, which was designed by sculptor Dario Bonuchhi and brought to reality by the architectural firm Giffles Associates and fabricator Darin and Armstrong. It was erected in 1969. 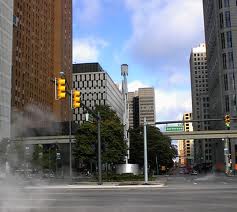 Lighting the Torch serves as a symbol of the concern and generosity of the people of this community. Metro-Detroiters have generously cared for their fellow residents. And throughout the years, the Torch has been a beacon. It’s overseen the changes taking place in our region and the transformation of United Way. Traditionally viewed as a fundraising organization, United Way for Southeastern Michigan has transitioned to a leadership role, mobilizing residents and organizations to make progress on the toughest issues we face.

For example, our efforts to increase the graduation rates in our lowest-performing high schools is on an upward trajectory. Early indications show that 80% of students in our network are on track to graduate.

We’ve made tremendous headway ensuring that children in our region are able to get the nutritious meals they need through a local and statewide effort called  “No Kid Hungry.” Our 2-1-1 call center, staffed with trained professionals, has assisted more than 300,000 residents get connected to essential resources 24/7/ 365 days a year.  This is only possible because of the generous support of individuals throughout the region who invest some of their money to ensure we have a chance to reach our Big Hairy Audacious Goal: to be one of the top 5 places to live and work by 2030.

I encourage you to be part of the change we are undertaking at United Way.  If you would like, you are welcome to join Sergio Marchionne, Mayor Dave Bing, Dan Gilbert and other leaders this Friday morning at 7 am as we light the Torch.

Moving our region upward cannot be accomplished alone. Rather, it will take all of us, with commitment just like the Dube brothers and their father (who lit the Torch before them), to make sure we are creating a spark that brings a light to those around us.

Hope to see you at the Torch lighting along with the Dube brothers and much help from our friends at DTE.