I have only known her for a few months, but she gave me one of the most beautiful and meaningful gifts I ever have received.  Janice Cho, a designer and artist, learned about an organization I was co-founding last fall and reached out to see if she might be able to come from Chicago to Detroit for a couple of weeks to help.  The thought of an extra pair of talented hands bringing the organization’s mission to life felt like a mini calvary was on the way to fortify our efforts.

Janice is an old soul with an abundance of gifts.  When you talk with Janice, you have this sense that you are being deeply listened to, and in turn, you trust her immensely.  She donated her time to help us give a look and feel to the name of the organization —Civilla.  We wanted something that represented the essence of the mission.  It many parts of the world, that is called logo design and creating brand standards.  For us, it was a elegant process guided by Janice that uncovered the story and meaning behind the mission.  At the end of the two weeks, she breathed depth, design and meaning into what is now our logo at Civilla.

Janice returned back to her professional journey in Chicago, but she left an unquestionable  imprint on us in Detroit.  We remained connected over the following months as occasionally  I would seek out advice on an item or two.  One such puzzle I wanted to solve was a simple item—business cards.  The team at Civilla had gone 6 months without them and often found ourselves scratching out on a post-it note our phone number and name.  We knew you could quickly print up business cards, but it just never reached the top of the priority list.  Plus, we didn’t want the very thing we would give away to someone to be just ordinary.

I often said, “our business cards ought to be something that others don’t want to throw away.”  So Civilla turned to Janice and asked if she could take on that challenge — create a business card that reflects the soul of organization—so much so—that someone wouldn’t want to toss it into the trash bin.

A couple months later, word came from Janice that she was going to come back to Detroit for a few days and she had finished the business cards.  As she came into Civilla and gathered around the organization’s table, she lifted up a bag that had some heft to it and said, “I have something for you.”

She reached in and set a hand wrapped rectangular package in front of me with a card—a business card—attached to the top.

I knew immediately, this wasn’t a stack of business cards, this was a piece of art that had been given love, thought and precision.  Janice letter-pressed and hand cut each card. The Civilla mark stood confidently in the corner as she had guided us to always place it there. My hand signature brought the personalization into the card, but also sent the message that Civilla is about ‘human centered design’.  This wasn’t just another industrial product.  The thickness is such that you can see the shadow it brings to the paper it is sitting upon.

I slowly opened the package and pulled out the first card.  I thought to myself, “wow, when I give this away, it has meaning.”   I turned the card over and noticed Janice captured one of the mantra’s at Civilla. 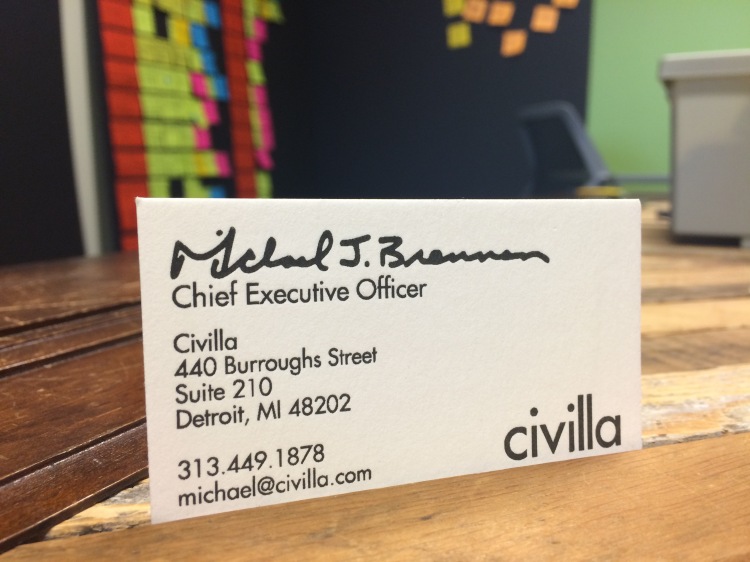 I later dropped word to Janice that I wanted her to send me a bill for her time and materials.  She requested not to be paid, but to receive it as a gift.  At that moment, I reflected on how she just demonstrated the art of giving a killer gift.

I have a mentor in my life that every time I have the chance to spend time with him, he inspires me to be a better person and mentor to others.  When I am with Janice, I want to be a more abundant and better giver.