“Club racing legend Bill Bloom, 72, crashed during a Fastrax sprint race Sunday. Bill, running one of his vintage Kawasakis, ran off in Turn 1 and went down. Doctors determined Bill suffered several broken ribs and a broken shoulder blade. He was hospitalized overnight and released the next day.” SVRider.com, 2007

Bill Bloom, sitting on an old wooden stool wearing a denim apron over a faded red flannel shirt and black down vest, peered through a raised-up Kawasaki 900 cc motorcycle with his smudged glasses across the garage scattered with parts, tools, bikes, pictures, and well used rags, and asked, “Can I help you?”

“Wondering if you might be able to do an oil change,” I asked.

He looked at me through the frame of the motorcycle as I stood just inside the dimly lit doorway and said, “No, I won’t be able to. I have this bike I need to get put together and there are a few other bikes ahead of you that need some work. I could get to it later this week.”

“Won’t work. I am just passing through. What are you working on there?” I asked.

Bill rose up from the stool, stood like an oak tree with a pear-shaped trunk, laid his hand on the frame of the bike, and said, “Trying to finish up this bike. It needs to be done and ready to race a week from this Sunday.”

The frame looked like part of a Lego set, with various pieces of the bike surrounding it on the floor and up on work benches.

“Who is racing the bike?” I asked.

Bill, now having come around to the other side of the bike, looked straight at me and said, “I am.”

“You race?” I asked in disbelief.

“My first race was in St. Mary’s, Pennsylvania 53 years ago and I have been racing ever since. I plan on racing and winning this upcoming week,” Bill replied with a steady voice full of conviction.

“I am trying to get a little bit more horsepower into the engine, but I am not so sure it is going to work. The rings might be just a bit too big,” he said, looking at his bike like a pet owner looks at the dog that went to obedience school but still can’t quite behave.

Bill began to give me a tour of his garage, showing me his collection of Kawasaki motorcycles.

“That one, got it in 1966. This one has 90,000 miles that my wife and I put on it. See the gun rack on the back of this one? Well, that is the one my wife and I ride. She has crutches. So we put the crutches on the gun rack. All told, I’ve gone over 200,000 miles on these Kawasakis,” he said with a look that hinted at a thousand stories to go with those miles.

“Bill, I am just curious. The bike you are working on – how fast will that go?” I asked.

“One hundred fifty-one miles per hour,” he replied.

“And when you race, how fast will you go?” I asked.

“One hundred fifty-one miles per hour,” he said with great certainty.

“Seventy-seven years old,” he said. “I have broken 33 bones in my body. Broke my leg one time just sitting in a pit stop and a bike came in too fast and swiped my leg,” he said as I looked at him, stunned.

When I once hit 90 mph on my motorcycle, I thought I was flying like a torpedo. That is about all my courage can take. Here was Bill in front of me at age 77 heading out to race his rebuilt, souped-up Kawasaki at 151 mph.

Bill said, “Let’s check your oil before you go. I don’t want you to break down while you’re out riding.” He got down on his knees, worked through the hot engine, and pulled out the oil stick. “You will be just fine.”

I thanked Bill for the help. Every once in awhile you meet someone who reframes for you what is possible. A man who runs a motorcycle repair shop in the Allegheny Mountains in Wellsboro, Pennsylvania did that for me.

As I rode away I thought, I am not sure I want to go 151 mph at age 77, but I certainly want to be able to have passions that motivate me beyond what I might think is possible.

If you find your world getting smaller and less full of possibilities, just think of Bill Bloom, at age 77, on a race track going 151 mph, chasing his dream. And then ask yourself, what dreams am I loading into my trailer? 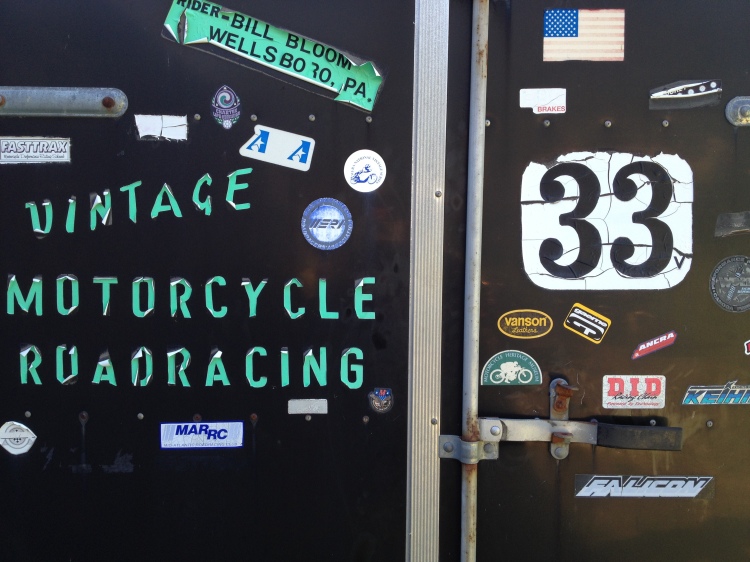